Town of Cape Elizabeth, Maine
About Us   /   History
History

As early as 1529, Cape Elizabeth appears as a nameless headland mapped by a Spanish cartographer.

Seventy-five years later, Samuel de Champlain charted the promontory, but not until 1615, following exploration by John Smith, was the land given its name in honor of Princess Elizabeth, sister of Charles I of England.

Events of the years that followed make an intriguing story: the 1632 establishment of Richmond's Island as a fishing and trading post, the struggles of settlers in small isolated groups as they began fishing and farming, conflicts between immigrants and the region's Native Americans, occasional pirating from the seas, the Revolutionary War...These and other events marked the first 200 years of colonial history in the region. 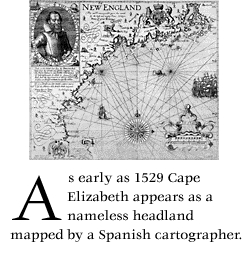 Originally a part of Portland (named Falmouth at the time), the citizens petitioned for and obtained their own government in 1765, thus including all the area lying south of Portland Harbor and east of the Spurwink River. Commercial and industrial growth in the north end of the town, nearest the harbor (now South Portland), was in sharp contrast to the continuing rural character of the southern tip of the Cape. In 1895, the two sections agreed to separate, and from that date forward the southern end of the original town became the present town of Cape Elizabeth.

The 20th century history of the community has been one of gradual residential growth. The majority of inhabitants now work in the Greater Portland area, and only very few of the working farms still exist. As the town embarks on the 21st century, townspeople recognize the importance of their farming and fishing heritage, and have taken legislative measures to protect and encourage Cape Elizabeth's rural character.